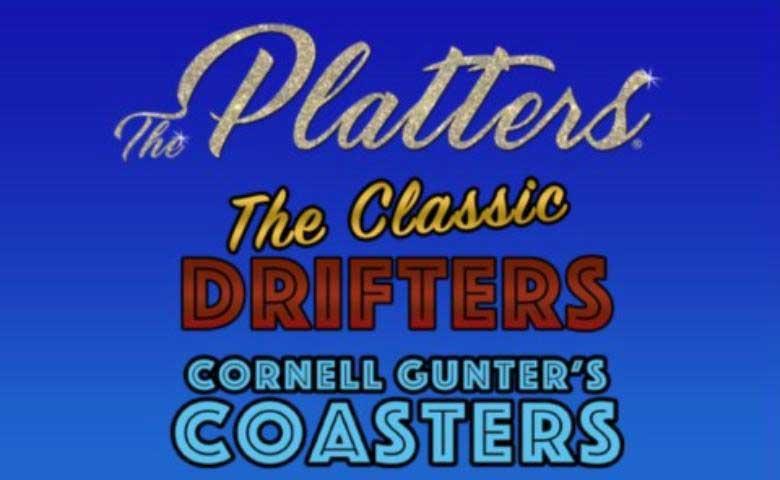 A Celebration of Life & Love with The Platters® and Friends;
The Classic Drifters and Cornell Gunter's Coasters
Buy Tickets Now
Location:
The Troy Music Hall

It’s not a concert…it’s a party!   Spend a nostalgic evening saluting three of the world’s most beloved musical groups who were instrumental in creating the Rock & Roll/Doo Wop sound: Cornell Gunter’s Coasters (“Charlie Brown,” “Yakety Yak,” “Poison Ivy”); The Platters featuring four of America’s premier singers performing their greatest hits (“Only You,” “Smoke Gets In Your Eyes,” “The Great Pretender”); and The Drifters, one of Rock & Roll’s founding vocal groups touring the U.S. again under the auspices of their original management team with their 50-year catalog of hits (“Under the Boardwalk,” “Up on the Roof,” “This Magic Moment,” and “On Broadway”).

Combined, these three Rock & Roll Hall of Fame groups have been associated with well over forty of the top classic songs in rock & roll history.  From “Under the Boardwalk” to “Only You” to “Yakety Yak,” very few artists can boast of a richer musical resume.  With such incredible musical diversity – from the comedy of Cornell Gunter’s Coasters to the romance of The Platters to the Motown magic of The Drifters –  this show has songs to please every palate, delivered just the way you remember them, when you first heard them on the radio.

To benefit: The Kids Reunited Everywhere Performing Arts Center (K.R.E.W-PAC) and Christ Centered Unity MBC. Established in 2010, K.R.E.W-PAC is a resource center for the Schenectady area, providing a safe haven that offers free lunch and arts and crafts programs for children during the summer months. Through adult outreach programs and youth field trips,  dance, music, and acting classes, and the opportunity to perform in an end of summary play for family and community, K.R.E.W-PAC rebuilds the community from the heart.