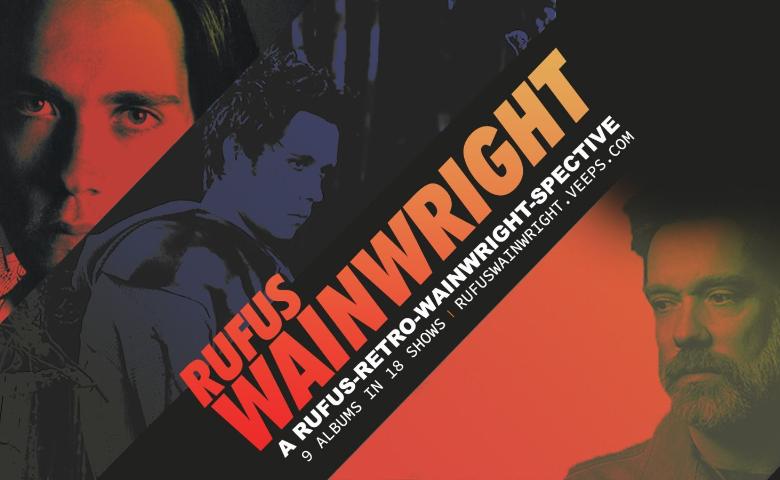 Rufus Wainwright & Lulu Want One to Release the Stars & Two to Unfollow the Rules because Shakespeare Poses to be Out of the Game.

GRAMMY® Award-nominated singer-songwriter Rufus Wainwright announces Rufus-Retro-Wainwright-Spective! a virtual live-stream tour through all 9 of the acclaimed musician’s groundbreaking studio albums. The tour will see the albums be performed in chronological order with one album side performed for each date. Wainwright also shares the dates for the first four albums, starting on Friday, October 9 with Wainwright performing the first side of his much-lauded debut album Rufus Wainwright. More dates will be announced for the winter at a later time. Tickets for individual shows are $20.00 in advance and $25.00 day of show, and 4 show bundles are also available. Bundles come with the opportunity for fans to participate in intimate Q&A’s with Wainwright and other surprises.

Says Wainwright of this exciting tour, “Special times need special artistic ideas. They also need leadership and unity but we are far from that here in the US. So we as musicians can give the world our voice, to offer reflection and vision at the same time. I cannot tour my new album “Unfollow the Rules” which is why I have had ample time to reflect. I consider “Unfollow the Rules” a bookend to my first album, both were recorded and produced in Los Angeles, in a lot of the same studios and with a lot of the same session musicians. I consider “Unfollow the Rules” my first album of maturity as a songwriter, following in the footsteps of the greats a lot of them have left us already or will very soon. So, it’s time to look back to look forward. I’m excited for fans to join me on my trip into the past and on this virtual world tour of my entire studio album catalogue.“

October 9 -- Rufus Wainwright: From “Foolish Love” to “Baby” Most of these songs were written in Montreal. I tried to make it in New York but nobody was interested in my tapes and style I guess. Van Dyke Parks got my demos to Lenny Waronker and I was signed to Dreamworks. At that time they had one more artist secured and that was a gentleman called George Michael who my fans know from his amazing cover of “Going to a Town”.

Three years later and over 50 songs demoed and a seven-figure production budget spent that I had to recoup obviously, I released my first record. What I think will be most interesting with these shows is how my voice has changed since I recorded these songs and to actually perform all of these in a stripped back fashion. My style has been called operatic-pop or baroque pop if they found a category for it at all and yes, I do like a big dramatic moment but I think true quality reveals itself with less and I think these songs will hold up in this chamber setting.

October 16 -- Rufus Wainwright: From “Beauty Mark” to “Imaginary Love”  This show starts with “Beauty Mark” which is about my mom. She was always my first audience until the day she died. She was also my fiercest critic. There are a lot of songs that are not on this album, most of them probably did not withstand her criticism. There are over 50 rolls of tape (yes, remember those analogue days?) from my recording sessions of this album in a Universal Music vault somewhere. Luckily, they were not in the one storage building that burnt down in Burbank years ago. I don’t believe that love is imaginary anymore. Love is the greatest gift and weapon that we have against darkness and hatred and I hope that this show will shine some light into the twilight of our days.

October 23 -- Poses: From “Cigarettes and Chocolate Milk” to “Tower of Learning”   Second albums are the hardest to make and I feel I did a pretty good job on this one. I was a pretty messed up young adult. Who has cigarettes with chocolate milk? There are a lot of musical influences in these songs from Rembetika (Greek folk music) on “Greek Song” to Oum Kalsoum on Poses and some people got me and Thom Yorke confused when they heard “Shadows”. I think there is a lot of Bjork influence in there as well. This show will end with “The Tower of Learning” which is a place I feel where our entire political cast should be spending some more time.

October 30 --  Poses; From “Grey Gardens” to “In a Graveyard”  I loved playing all of these songs on my last “All these Poses” tour backed by a large and muscular band and am excited to give them the living room treatment during these shows. Not sure yet what to do with “Evil Angel” as that was such an epic moment on the Poses show. That song will definitely be dedicated to Donald Trump and a few other political leaders globally. Hope they will all soon be “In a Graveyard” of history.

November 6 -- Want One: From “Oh What a World” to “Vibrate”  My youth is coming to an eclipse on the “Want” albums and so is my addiction to alcohol and drugs. I think I was transferred to another label within the Universal family at this point and the albums really didn’t do much in Europe. We then hired the fabulous Barbara Charone to do my press in Europe and got the label to re-release the two albums in the UK and it really launched me in the UK. These tours were a blast and a bit of a blurr. I think “Go or Go Ahead” is probably the most epic song I have ever written or recorded and I am really curious how we are going to do it in our living room.

November 13 -- Want One: From “14th Street” to “Dinner at Eight”  Working with Marius de Vries on these albums was a pure joy. Our motto seems to have been: If we can make it lush, why don’t we make it lusher? These songs are like indigenous rainforests, you can get lost in them. The songs are very much about my experience around the time that I wrote them but there is a universal meaning in them as well which I think will become clearer during these shows. Everyone has had a “Natasha” as a friend who finds herself on the precipice of life, every child has anxieties about growing up and feels a “want” to live up to your idols or everyone who is the child of divorced parents knows that a family “Dinner at Eight” will never be the same. When David Bowie called that song the best song written about a father and son relationship, I was incredibly proud. Even when I was young, I always felt a little bit old at the same time and these songs really express that feeling to me.

November 20 -- Want Two: From “Agnus Dei” to “Hometown Waltz”  “Want Two” is really one gigantic b-side to Want One. It is even more free, more experimental than “Want One” I feel. If “Want One” is like a rainforest, this is a Rosetti painting of a rainforest with a “Peach Tree” added for color. I am not sure what I was thinking when I wrote Agnus Dei but I probably had a premonition that something fundamental might collapse in my life, that things cannot go on like this forever and that we needed a prayer to save us.

November 27 --  Want Two: From “This Love Affair” to “Old Whore’s Diet”  Touring the “Want” albums was incredible. I got crucified, not by the press or audience, but by my fellow bandmembers on stage during “Old Whore’s Diet” and we stripped. At the end of the tour I had a boyfriend who is now my husband. It pays to advertise and all these songs really are unabashedly about me and pouring out all my emotions and desires. “Discretion I’m hardly known for” I sing on “Crumb by Crumb”, a song I have not performed live in probably over a decade. I am still that person but I am also not.  I look forward to putting on the cloak of these songs again and feeling like being in my twenties again.

Additional shows covering the rest of Wainwright’s catalogue will be announced at a later date.