About the Music Hall 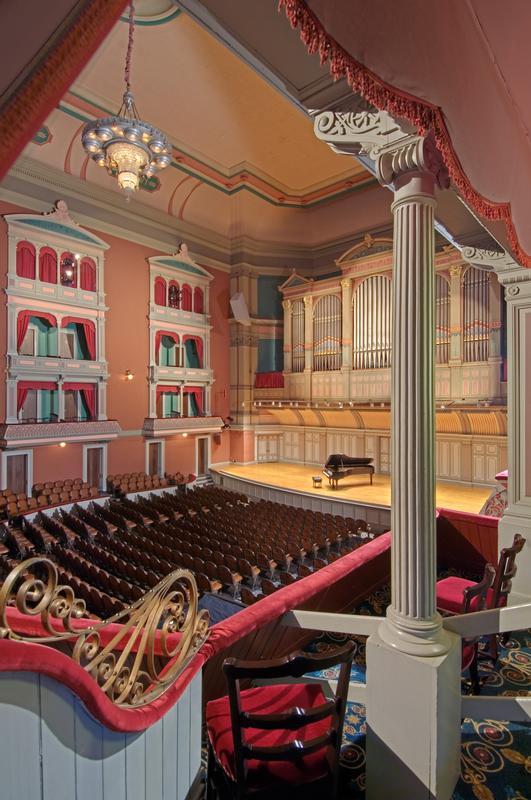 Founded in 1823, The Troy Savings Bank operated from smaller banking offices until, in 1870, the Board of Trustees of the Bank decided to move its offices to a new location one block away. To demonstrate the Bank's appreciation for the many years of patronage by the local citizens, the plans for the new building included a music hall on the upper floor. After examining various proposed plans, the Board of Trustees selected George Browne Post as the architect.

In the early years of the twentieth century the Music Hall was honored with performances by such world-renowned artists as Lillian Nordica, Henri Vieuxtemps, Ignace Jan Paderewski, Albert Spaulding, Sergei Rachmaninoff, Myra Hess and Jose Iturbi. During the era preceding World War II, internationally respected performers continued to grace the Music Hall stage, including Vladimir Horowitz, Yehudi Menuhin and Artur Rubenstein, among many others. Rarely did a great musician of the day fail to include on his or her American tour an appearance at the celebrated Music Hall atop The Troy Savings Bank.

As the twentieth century progressed, Troy's industrial dominance declined. As Troy's wealth faded, so did its ability to support the arts on the scale to which it had become accustomed. The advent of radio, cinema and television provided alternative forms of entertainment for the city's growing middle class. Troy's community leaders began looking into ways to save the Hall. Ideas, most of which involved buying the building from the bank with either private or public funds, included establishing a Museum of Industrial and Folk Art downstairs and renting the Hall itself to the area's many colleges.    In 1979, a group of private citizens formed the Troy Savings Bank Music Hall Revitalization Committee. Since funds for the renovation could legally come only from the bank, the new organization's mission was to find ways to utilize the Hall as much as possible in its present condition. The Committee received grants from the New York State Council for the Arts for an audience-potential study and from the Howard & Bush Memorial Foundation for managerial development. With the bank's support and additional funding from the city and county for its administration, the Troy Savings Bank Music Hall Corporation was born. A not-for-profit organization which leases the Hall from the bank, it began its introductory 1979-1980 season with a performance by the Benny Goodman Band.

Today, the Troy Savings Bank perpetuates its gift to the Troy community through its ongoing restoration and renovation projects, while the Music Hall Corporation moves ever closer to its goal of developing the full potential of this treasure. The Hall, which was named a National Historic Landmark in 1989, is in use over one hundred and fifty days a year, and looks forward to a future fully as bright as its storied past.

Built decades before the birth of the modern field of architectural acoustics, George Post’s Troy Savings Bank Music Hall incited a less than favorable response from critics upon its 1875 opening. Twenty years later, in 1890, a large, eight year old Odell concert organ purchased from New York financier William Belden was installed in the Hall. Though its design was never intended to accommodate such a substantial presence, legend has it that this modification transformed the Hall into the acoustic wonder that it is today.

The truth is that great halls aren’t made by a single intervention, and Troy Savings Bank Music Hall was destined from the beginning to stand among the best in the world. The narrow shoebox form promotes early sidewall reflections that are important for a sense of envelopment, and the tall ceiling and ideal seat count of 1180 to provide intimacy and sustain an optimal reverberation. The original padded wooden seats absorb a minimum of sound, and the shallow under balcony ensures listeners in even the deepest seats hear the effect of the entire room. The thick plaster surfaces support middle and low frequency sound and the ornamental detailing acts as acoustic diffusion, scattering and distributing sound energy evenly. The Odell organ itself - a magnificent instrument restored to working condition in 2006 - performs a second duty as acoustic diffusion, and the cove between the organ and stage improves musician communication while projecting sound to the audience.

By 1925 the importance of the Hall to the community was such that Troy historian Rutherford Hayner wrote: "The building of a great Music Hall, one of the really important structures of its kind in America, fifty years ago, gave to the community a sort of rallying point musically... Certain it is that no city of equal size in the country has enjoyed so much of the world's best music and musicians."

Today the Hall’s excellent reputation for orchestral and chamber music has expanded to include amplified events. Acoustic curtains line the rear walls and can be deployed or retracted as needed, and hand-painted absorptive panels can be added to the cove on stage without a visual change. Always with preservation of sound as the top priority, Troy Savings Bank Music Hall has evolved to become a destination venue for a wide range of classical and modern music performances and recording.

Finally, the visual and historic appeal of the Hall must not be overlooked in any discussion of its acoustic character. The ear and the eye are inseparable in the concert-going experience, and even a room with equivalent acoustics could not sound as good as the visually stunning, historically rich Troy Savings Bank Music Hall.

George B. Post's design was selected by default: due to his pioneering work in crafting metal to simulate stone, his was the only estimate to fall within the board's projected budget. A graduate of the University of New York, Post studied under Richard Morris Hunt in the mid 1800's and soon became a respected architect in New York City. His preference for the Beaux Arts and French Renaissance styles seen in the highly detailed decorations of the building he designed for the Bank and the Music Hall. Construction began on the bank's new property on the corner of State and Second Streets in July 1871.

The building was completed in April 1875, at a final cost of $435,000. The result was a massive six story edifice which dominated the surrounding neighborhood. The bank offices comprised about one-third of the first floor; the remainder was rented to area businesses, including at various times an insurance company, the Troy Chamber of Commerce, a bus terminal and a plumbing company. Above this rose the Music Hall, 106 feet long, 69 feet wide and a towering 61 feet high.

Original granite stairs running the width of the building introduced concert-goers to the ornate grandeur of the hall. (In 1923, structural alterations changed the Second Street main entrance to the way it appears today, accessible to both the Bank and the Music Hall.) Box offices to the left and right preceded a center stairway, which led to the hall itself. Parquet and Dress Circle seats were reached by using the center staircase. Iron staircases on either side guided the way to the upper and lower boxes, the balcony, and the gallery seating areas. Post designed all of the staircases himself and had them constructed by Architectural Iron Works in New York City.

Intricate frescoes, crafted by another New York City firm, G. Garibaldi, decorated the walls about the stage and ceiling. The frescoes above the stage were covered by the addition of a large tracker action organ in October, 1890.

Most of the original frescoing is still visible, except for the ceiling, where the replacement of the chandelier in 1930 also involved repair work on the ceiling frescoes. The first chandelier was remarkable, with 14,000 hand-cut French prisms catching the light of 260 gas burners, ignited by a single traveling gas jet. In October 1923, it was converted to electric, and later replaced by the chandelier which hangs there today. The rest of the lighting was converted in 1929, following an accident in December 1928, when a ballerina's headdress was ignited by a gas lamp in her dressing room. The fire marshal ordered the conversion from gas to electric to avoid further problems. The new frescoes, made in 1930, outlined the rim of the ceiling and exhibited the popular Art Deco styling of the late 1920's in the lettering, featuring the names of great classical composers such as J. S. Bach and Haydn. The chandelier has not been modernized, and still must be raised and lowered by a hand crank.

The organ in the Troy Savings Bank Music Hall is the nation’s largest nineteenth-century concert organ in original condition, and, indeed, it is one of the most distinguished surviving examples of a “golden age” in American organ building. It was built in 1882 by the Yonkers firm of J.S. and C.S. Odell, and was originally installed in a New York mansion belonging to millionaire William Belden. It was subsequently purchased by the Troy Savings Bank and moved to the Music Hall in 1890. Apart from routine maintenance, which ceased several years ago, the instrument has remained essentially untouched since its installation and even most of the leather appears to be original.

The sound of the Music Hall organ is truly magnificent, with a wealth of rich foundation stops and colorful reeds and with powerful pedal registers that literally shake the building. It is a distinguished example of romantic organ building, and it was for precisely these kinds of sounds that the great organ works of Mendelssohn, Franck, Widor, Vierne, and Reger were written. The instrument is also superbly equipped for playing the organ parts in such magnificent orchestral works as the “Organ Symphony” of Saint-Saens, the Strauss Also sprach Zarathustra, Mahler’s second and eighth symphonies and Respighi’s Church Windows.

Among connoisseurs of historic American organs, the Music Hall Instrument is widely considered to be one of the most important; and many prominent organists have expressed the hope that it will be restored.

- Notes on the Organ by Scott Cantrell