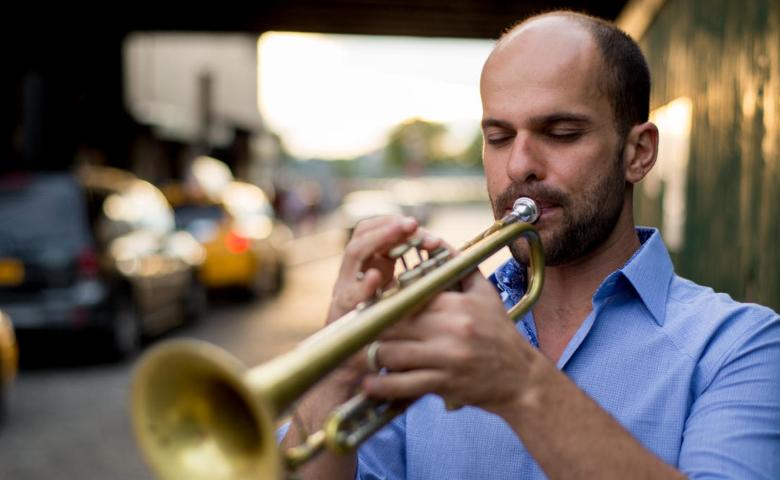 Rivers of Sound is a large ensemble of instrumentalists from Western and Middle Eastern traditions, exploring the confluences of a musical language that transcends notions of tradition and style. In performing Not Two, an original composition by Amir ElSaffar, each musician interacts with the group through both improvised and composed material to create a novel composite sound.

Composer, trumpeter, santur player and vocalist, Amir ElSaffar, an expert in Jazz and Iraqi maqam, has forged his novel approach to combining musical languages through his six-piece ensemble Two Rivers. Over the past eight years, the group has released three CD’s on Pi Recordings. Crisis, the most recent, was a Newport Jazz Festival commission. Jazz critic of the The Chicago Tribune, Howard Reich, declared Crisis “one of the most beautiful and evocative jazz recordings of the year.” A reviewer for The Wire, stated that “ElSaffar is uniquely poised to reconcile jazz and Arabic music without doing either harm…the result of engagement across the board, presented with clarity and eloquence.”

Rivers of Sound: Not Two is a continuation of the Two Rivers concept, but projected onto a wider canvas unprecedented in scope and imagination. Microtonal maqam melodies traverse a richly-textured bed of sound created by oud, buzuk, and santur, in combination with cello, violin, saxophones, English horn and trumpet. Also at play are multilayered, rhythmic patterns and harmonies performed by re-tuned vibraphone, piano and guitar. The drum set, mridangam, dumbek, frame drums and double-bass provide the rhythmic foundation and subdivisions of the multiple currents. Resonance across rhythmic, tonal, and timbral spectra, and across musical traditions, is the guiding principle.

The highest ideal in maqam music is to reach a state of tarab, or “musical ecstasy,” which results from the melting away of borders between a notion of self and other, as performers and audience revel together in the music. As pitches and rhythms become fluid, so do cultural boundaries: elements that traditionally divide musicians and genre-specific modes are re-contextualized in a fresh transcultural soundscape.

“A genre-blending 17-piece group combining both jazz and Arab instruments…it’s an almighty river, full of twists and turns, peaks and troughs — and gushing waterfalls of sound.

Blending scales from the Iraqi maqam tradition with jazz ornamentation, melodies and rhythms intersect, criss-crossing musical lines dancing like brushstrokes across a broad canvas. Often strings and ouds pluck out a bedrock of repetitive figures, while a row of brass soar overhead, and an engine room of an extended rhythm section drives at the back…ElSaffar strolls the stage directing his musicians, signalling solos and changes, playing the role of both composer, conductor and star.

Refrains build and fall, textured timbres churn, trancelike waves swell and crest. The rivers motif is fitting — there’s something liquid about these breaking waves of sound, a liquidity to these cascading drops of simple repeating melodic fragments.” – The National 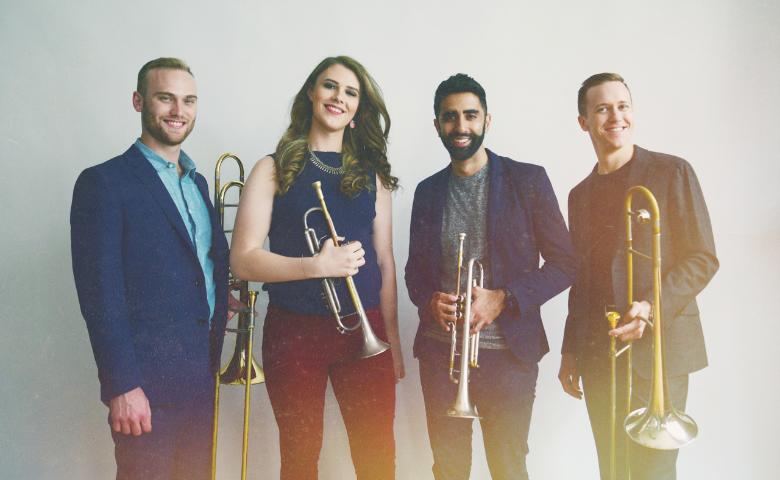